Hello there, this is a review, just so you know. I'm not going to do many/any more of these, because it makes me feel a bit funny. Which is stupid, but there you go.

Here's what happened, some kind soul said they'd send me a thing called a Cozy Wrap, for free, if I would spew some words onto a page telling people about my experience with it.

"Haha" I thought, "this person is clearly completely unaware that NOBODY reads my blog". But regardless, I said yes, because I thought it would be nice to get some free stuff.

They also asked me to include a link back to their page selling the wrap. Which I have done. So all you MILLIONS of readers can head on over and purchase one after reading my glowing report.

I was ready to be all sneering and cynical about it, had the product warranted it, so be sure that what I am saying is ACTUAL TRUTH.

First, some sneering cynicism: the product is very clearly American. That in itself is not a problem, I like Americans tremendously. However they are a little bit lawsuit happy, which means all their products come with very detailed instructions. The instructions for this are on a DVD. Which meant I had to listen to a very soothing American telling me how not to drop my baby.

After we watched the DVD we attempted to put The Creature in the wrap for the first time. Here's a photo I took of how happy he was about that: 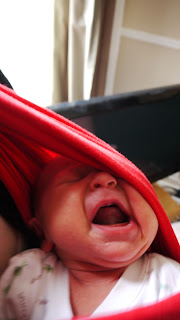 After about twenty minutes of him not settling, we aborted that attempt.

Following that, we tried him in it a few times, with similar results. It's not the wrap's fault though, our baby's just a bit rubbish at not crying.

Then, one day, we managed to get him in it and he settled. Winner! It was a revelation. From that moment on we could pretty much guarantee that being in the wrap meant a sleepy baby.

Now when he goes in the wrap he looks like this: 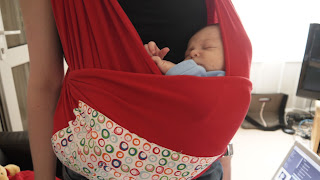 Which is far better.

I actually love using this thing (apart from it being bright red, which really isn't my colour...)  Once you've done it a few times it's really quick to put on, perfectly comfortable, and allows you to have unexpected conversations with every fifth person who walks past you ("is that a baby in there?", "no, I just think it looks cool"). As a man, it does get you the odd funny look, but I really don't care about that, I'm not winning any style awards anyway.

Drawbacks? It's not terribly clever in the rain, so it was pretty much impossible to use it outdoors for the past month. I'm expecting it will also be pretty hot and sweaty in hot weather too. Probably no more hot and sweaty than pushing a buggy around though.

Overall, I'd recommend it.

PS - To the person who sent me the wrap, thank you very much, and sorry it took me roughly forever to get around to writing this.