Last Sunday, all of the above applied to me.

Mrs L started feeling a little unwell around lunchtime. By three in the afternoon she was in bed. Apart from when she wasn't in bed because she was doing one of the things that Norovirus makes you do. You know the ones. Erk.

So the 4:21am alarm call (is there a worse alarm call than the sound of a baby doing proper vomiting for the first time in its life? I think not. I haven't changed the alarm sound on my phone to it.) was mostly for me. Mrs L did get up, because she's hardcore, but was soon back in bed.

Seeing your son lying face down in a two foot diameter pool of his own vomit is quite scary. Especially when he's not moving. Sleeps well that boy. Without thinking too much about it, I picked him up and started changing his clothes and nappy.

At the point where he was most naked, the viral invaders resumed their attack on his tummy. I picked him up to comfort him. He vomited over my shoulder onto the carpet.

I stood on the vomity carpet for a bit, feeling lost. I couldn't work out what to do first. Despite Cam's recent stomach and bowel evacuations he was in a ridiculously chipper mood. He certainly wasn't going to sit still while I cleaned up the rest of the room. Especially since Cam is to vomit as a magnet is to ferrous metal: irresistibly attracted.

Being a parent is weird. Things happen on a regular basis that make me think "I don't know what I'm doing", but somehow I muddle through. That's what we all do. There is no definitive manual for parenting (there may be things which THINK they're definitive manuals for parenting, but they're not). There is nothing in a book which will instruct you on how to grow a second pair of arms in order to hold the baby and simultaneously change the bedclothes and clean the carpet.

I don't remember what order I did things in, but somehow he ended up with a new sheet on the bed. A clean nappy, vest and babygrow. A hastily cleaned carpet. A dazed and confused father.

My Christmas wish for all of you is that Norovirus doesn't come to visit.

Justin Bieber and the Apocalypse

I saw an absolutely fantastic tweet this morning. There's a picture of it somewhere in this post. I don't know where because I'm posting from my phone which makes the formatting pure guesswork.

I'm imagining Justin Bieber standing atop a blackened mountain, his shirt torn open, the sky behind him burning with the fury of a world ending.

His hair is defiant. Immaculate. It is our first clue that he WILL NOT STAND BY AND LET HIS BELIEBERS DOWN.

Staring into the sulphurous sky The Bieber awaits the arrival of the four horsemen of the apocalypse, or whatever the Mayans (didn't) believe was going to carry out the annihilation.

At the foot of the mountain, practically orgasmic in their froth of fanaticism, stand the Beliebers. Thirty one million, seven hundred and two thousand and nine hundred and fifty five of them; screaming. Not in fear at their imminent doom, but in abundant ecstasy at the sight of their teenage deity.

The ground around them begins to crack, rent asunder by the cosmic forces working to reduce humanity to dust. The Beliebers stand strong. Arms linked, faces set in grim determination.

It is time. Bieber draws breath and prepares to unleash his world saving vocals. Mayans be damned.

He opens his mouth, sings the first word of Baby (baby? Probably) and the mountain collapses. The gaping earth swallows Justin and the hordes of Beliebers. The rest of the world is left unscathed. 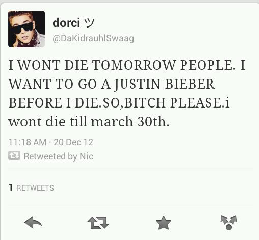 Sorry, I know I'm a bit late to this party, but what about that David Davies?

He's a Tory MP, so it should come as little surprise to hear him saying something I disagree with. Par for the course that, and something I can usually bring myself to ignore. Good job really, since if I wasn't able to ignore the blatherings and blusterings of Tory MPs I'd probably collapse in on myself like an imploding star. The resultant black hole would probably be no good for people of any political preference.

Which leads me (sort of) to the specific thing David Davies was going on about which got me wound up enough to blog about it.

We all have preferences. It would be a dull old world if we didn't. They're very personal for the most part. Some are less so, driven by a sense of right and wrong. There are also many, many things where people have no preference.

For example: Given the choice of kicking David Davies in the left shin or the right, I would have no preference. They would be equally enjoyable and amusing. There would be, as far as I can reasonably foresee, no advantage to doing one or the other.

Mr Davies told us on the weekend (in the midst of the wider, tedious discussions on gay marriage) that he "thinks most parents would prefer their children not to be gay".

This has been irritating me since I heard it.

He's not being homophobic by saying that you understand. He can't be homophobic, because he once sparred with a gay boxer. Not only that, he LIKES AND RESPECTS said gay boxer. Obviously this is the best argument in the world; I use a similar one when my mum asks why I don't like Brussels Sprouts: I can't dislike them, I ate one when I was seven.

Erm, anyway, he thinks parents would prefer their kids not to be gay because they want to be grandparents. My sister is gay. She has a four month old baby. For goodness sake David, this is 2012, of course gay people can have children.

But that's not the point. It isn't the role of anyone's child to simply pander to the whims of their parents. Even if Davies' statement is true (and I really, really hope it isn't) it doesn't matter one bit. Just ask the millions of dads who would prefer their sons to become professional footballers. What a parent might prefer and what is actually going to happen can (and probably should) be a world apart.

Among my list of non-preferences is the gender of the people my son ends up doing the naked pentathlon with. I honestly couldn't give a solitary shit. And if I did give a shit, I would hope I'll have raised my son well enough to know that he should tell me to fuck off.

Which is exactly what I'd prefer David Davies to do.